Hungarian geographers and cartographers have always played a decisive role in developing knowledge about the country and in forming an image of Hungary and the Hungarian nation. After World War I, numerous geographic and cartographic works, including maps and series of maps, were published, mostly in French, English or German. These products presented the catastrophic effects of the Treaty of Trianon (1920) on Hungary and sought to justify a complete or partial restoration of the territorial integrity of the country. However, the first national atlas with a broad range of topics in the modern sense, was only published in the second half of the 20th century, in 1967. This was followed by a second edition with much richer content in 1989. The maps, with a few exceptions, concerned only the territory defined by the state boundaries of the Hungarian People's Republic. The editing of this volume was coordinated by the Geographical Research Institute of the Academy. The Institute, reacting to the rapidly changing social and economic conditions of Hungary 's political transition, published five booklets of supplementary pages to the atlas in 1994–1995. These maps were produced in a modern form and using digital technology.

Despite two decades of fundamental economic and social changes, the Republic of Hungary has not yet felt it justified to publish a new national atlas. Meanwhile, national atlases have been published one after the other throughout Europe, from Madrid to Moscow, Paris to Kiev, and Ljubljana to Warsaw. To meet public demand in Hungary, Cartographia Co. published a smaller collection of maps of Hungary in 1999. At the end of 2009 and in mid - 2011, the Academy and the Geographical Research Institute of the Academy each published a small atlas (Hungary in Maps) using their own financial resources. However, the two atlases are no substitutes for a modern (printed and digital) Hungarian national atlas.

The following contains short descriptions of Hungarian national atlases published in the past and of those thematic atlases that are considered their forerunners; they are all published in full as far as possible. 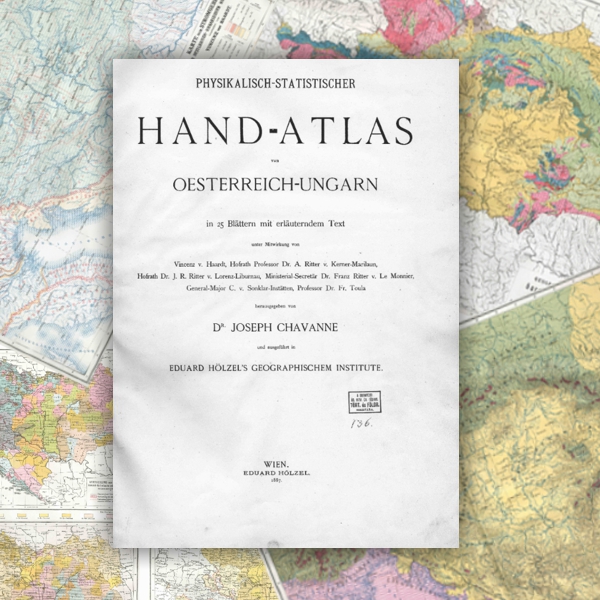 The atlas followed by a few years the publication of its German model (Andree, R. – Peschel, O. 1878. Physikalisch-Statistischer Atlas des Deutschen Reichs, Velhagen-Klasing, Bielefeld-Leipzig). This thematic atlas (32.5 x 49 cm in size) was first published in booklets and on sheets respectively between 1882 and 1887, then in a single volume in Vienna in 1887, presenting the physical geographic and social-geographic (“statistical”) aspects of the Austro-Hungarian Monarchy. This atlas, published in German only, contains 50 pages of maps (20 maps at 1:2.5 million and 20 maps at 1:5 million) and 68 pages of explanatory text accompanied by numerous statistical tables). Nearly half of the map pages concern the natural environment, almost a third deal with population, and a seventh with the economy. The rest of the maps present political and administrative subjects. Although this Austro-Hungarian atlas was a pioneer publication in those years, it cannot be considered a national atlas in today's sense in view of its thematic and methodological shortcomings. However, it might be seen as the first milestone in the development of Hungarian national atlases. 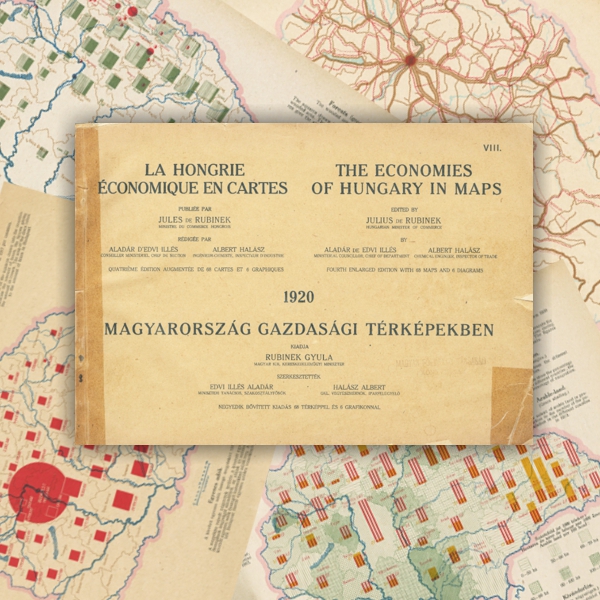 This three-language atlas published between 1919 and December 1920 as background material for the peace talks in Trianon in 1920 did not meet all the criteria for a national atlas, because it mainly showed the economy of Hungary only on the basis of data from the last year of peace (1913). The 4th edition (29 x 20.3 cm) already contained 68 colour maps (at about 1:4.2 million scale) and 6 graphs. 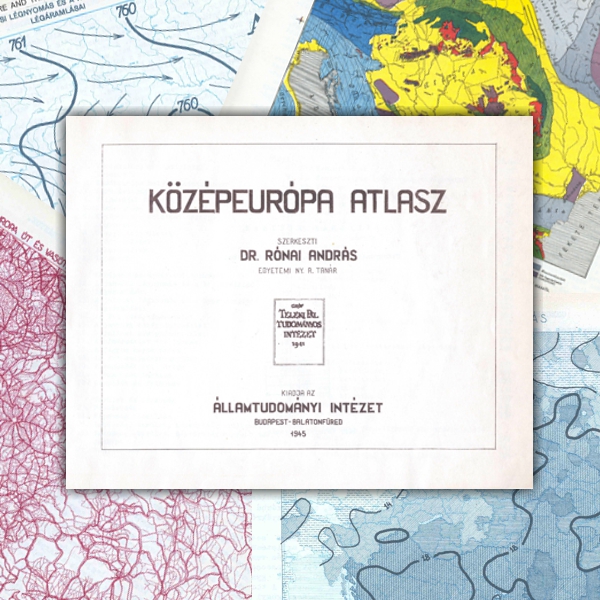 This work was edited by András Rónai, director of the Institute of Political Sciences, which is regarded as the organizational predecessor of the present Geographical Institute, Research Centre for Astronomy and Earth Sciences of the Hungarian Academy of Sciences. The atlas was published in Hungarian and English and it met all the requirements of a national atlas, with one exception: it did not show the territory of a country (Hungary) exclusively, but rather the area of Hungary, the Carpathian Basin and its broader environment on 134 colour maps at a scale of ca. 1:6.2 million on 334 pages. The English-language version of the atlas (31.5 x 23 cm in size) contained 171 maps on 367 pages. This masterpiece was originally prepared for the talks on the peace treaty after World War II, but later it was almost destroyed. Its digital facsimile version was published in Hungarian and in English on 411 pages by the Society of St. Steven and Püski Publishing House in 1993. The cartography work was mainly undertaken at the Department of Cartography of Eötvös Loránd University. 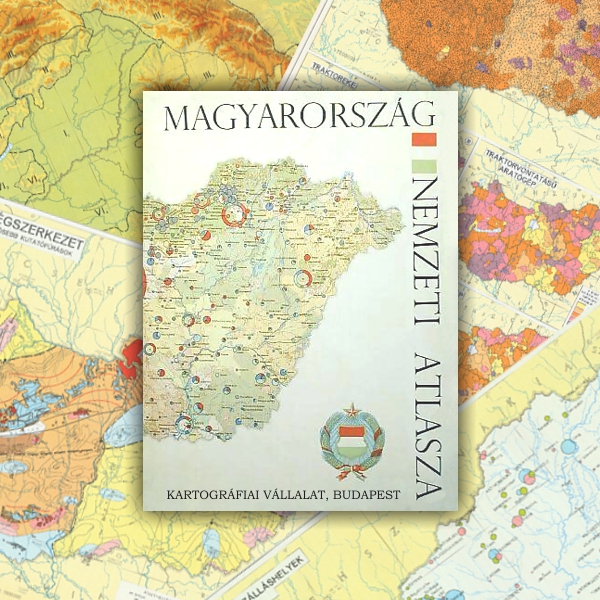 Preparations for the first official national atlas were started in 1959, relying on the recommendations of the Commission on National Atlases of the International Geographical Union. The work was directed by Sándor Radó, editor-in-chief. The atlas (29 x 40.6 cm in size) was published on 112 pages in 1967 with the scientific cooperation of the Hungarian Academy (mainly its Geographical Committee) and the cartographic collaboration of Cartographia Company. The aim of the atlas was to support “economic management and planning” and develop knowledge about the country. Consequently, the first “cartographic ID” of the People's Republic of Hungary was published in red binding. It had 280 maps in colour (mostly at 1:1 million to 1:2 million scales); almost 60% of the maps showed the state of the socialist national economy, a third represented the natural environment, while slightly more than one tenth of the maps dealt with Hungarian society (mainly with population and settlements). 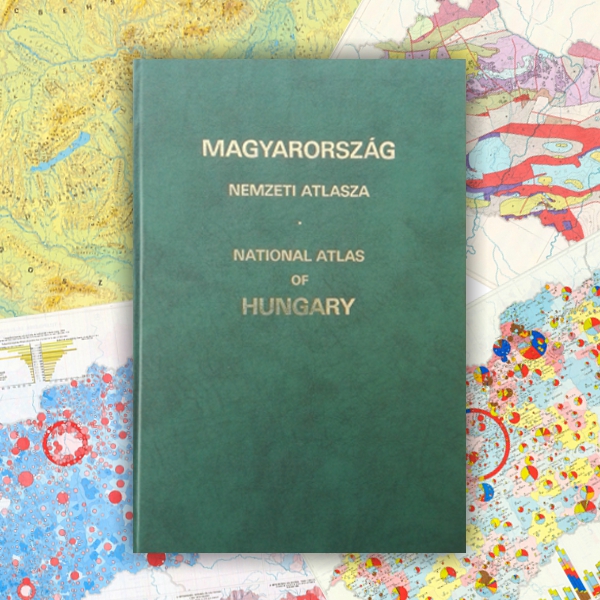 In 1983, the Hungarian Academy of Sciences, under the presidency of János Szentágothai, decided to publish a new edition of the National Atlas of Hungary. As in the case of the 1967 edition, the idea was supported by the government and the Ministry of Agriculture and Food. The atlas was completed in six years under the direction of Márton Pécsi, head of the editorial board and director of the Geographical Research Institute of the Academy. The atlas was prepared in cooperation with 87 (mostly) state institutions and organizations and 183 authors and editors. The atlas was published in 1989, shortly before Hungary 's democratic transformation. It is four times as voluminous as the first edition. The atlas was published in one single volume on 395 pages of 29 x 43 cm. Its bilingual (Hungarian and English) edition was an expression of Hungary's opening to the outside world. The extent of explanatory texts followed international trends and significantly increased compared to the 1967 edition (from 8 pages to 100 pages). Due to the size of Hungary, the scale of most of the maps (1:1 million to 1:2 million) did not change. The structure of topics remained almost the same, reflecting the fact that the primary function of the atlas was to facilitate socialist regional planning. About 60% of the 763 maps continued to show the condition of the national economy, but the ratio of maps dealing with social topics and introductory maps increased slightly (12% and 8% respectively) at the expense of physical geographical maps (21%). When the political climate grew milder in the second half of the 1980s, the acquisition of information became easier. Moreover, it became possible to publish criticism of socialist industrialization, agricultural policy and regional economics. The contents of the atlas reflect such developments. 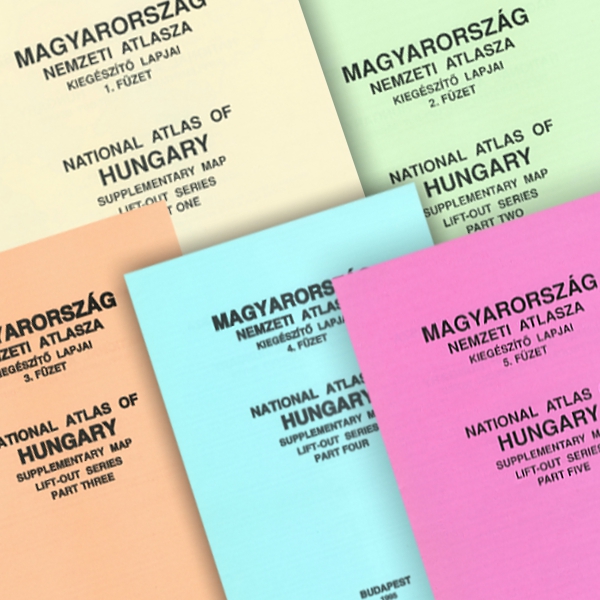 The fundamental social and economic changes after 1989 and the publication of the data of the 1990 population census inspired the Geographical Research Institute of the Academy to issue supplementary map sheets to the National Atlas of Hungary with the purpose of quickly providing society with reliable information. In accordance with modern international trends, the editors broke with the tradition of publishing a uniform and large volume. Opening up to the general public and the education system expressed a change in function, as people were becoming more interested in problem-oriented subject-matter (such as ethnic issues, new public administration, demographic problems, international migration, elections, taxation, environmental conflicts). Further, map-making switched from traditional techniques to digital technology (ArcGIS). 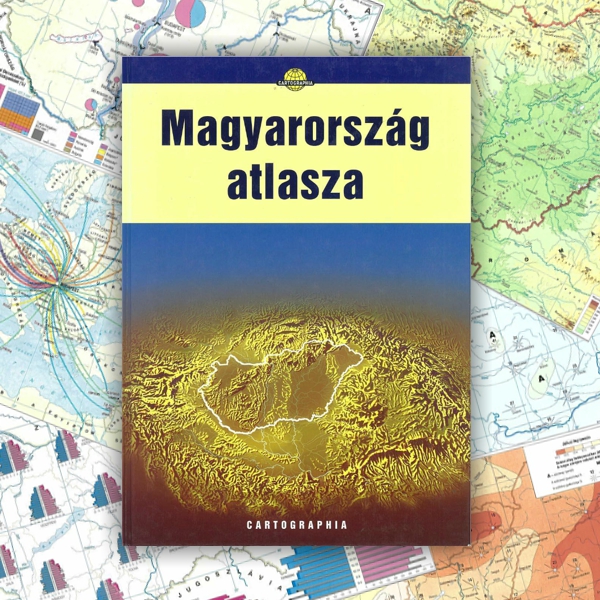 This atlas (23.3 x 32.9 cm in size) is much easier to handle than were the former one-volume national atlases. The aim of the publisher was to present, mainly for people involved in higher education, the basic social and economic changes that took place in Hungary after 1989. The atlas has 132 numbered pages, with 106.5 pages of maps and 24.5 pages for an index and a list of settlements. Owing to changes in function and the requirements of the targeted users, the structure of the map pages differed significantly from the 1989 edition of the national atlas. The ratio of map themes became more balanced: the ratio of economic maps fell from 49% to 23%, while the ratio of introductory general geographic and political-administrative maps increased from 10% to 26%. The scale of most maps was 1:2.5 million. The atlas contained 21 maps of the Carpathian Basin (including 16 physical geographical maps), whereas only three maps had shown this broader area in the 1989 edition of the national atlas. This fact clearly reflected a major change in attitude. 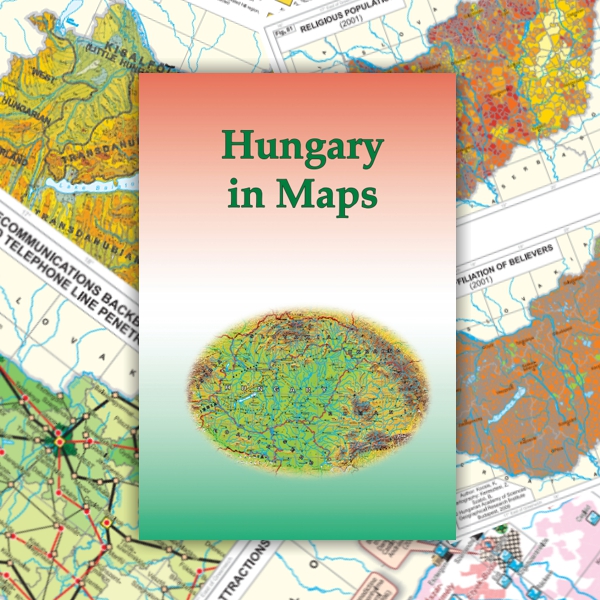 This relatively small-sized atlas (21 x 29.8 cm) gives an overview of the contemporary natural, social and economic state of Hungary in English for an international readership. The Geographical Research Institute of the Hungarian Academy of Sciences published it on the twentieth anniversary of the democratic transformation in Hungary, the tenth anniversary of Hungary 's accession to NATO, and the fifth anniversary of Hungary's joining the European Union. The publication also formed part of a series of regional atlases on Southeast Europe and Ukraine. The 211-page atlas was made using digital technology, and the ratio of texts and maps was about 2:1. The topics of nature, economy and society were given similar weight and importance on the 142 maps. Unlike the former national atlases, this English language “business card” of the country offered new ways of presenting a range of subjects to satisfy domestic and international interest in Hungary. Such topics included ethnicity, politics, urbanization, commerce, telecommunications, and tourism. 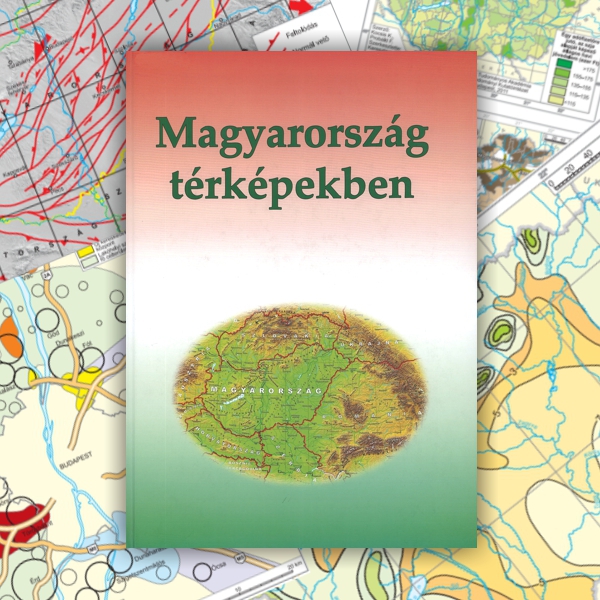 This publication is not just the Hungarian version of the atlas published in English in 2009; rather it is an enlarged, updated, revised and multifunctional edition with the same page size (21 x 29.8 cm). With the addition of new chapters (parliamentary elections, talent geography), the number of pages increased to 248, the number of maps to 165, and the number of authors to 38. This handy and comprehensive atlas aimed to give an overview of Hungary in the early years of the third millennium for the average educated person, for people involved in secondary and higher education, and for decision makers at government level. After the publication of the atlas in conventional printed form, the full content of the atlas was placed on the homepage of the Geographical Research Institute of the Hungarian Academy of Sciences, in this way offering fast (and free) information.